The disturbance and seeding experiment aims to explore different questions that are highly relevant from a scientific, agricultural, and conservation perspective. On the one hand, it is about resilience, that being the resistance of the ecosystem to disturbances. Resilience is an important component of the stability of an ecosystem. Here we are studying how quickly the ecosystem ‘grassland’ with all its functions can return to its original state after a drastic disturbance, and how much resilience depends on the former diversity of the vegetation and the current land use. On the other hand, research is being conducted into the extent to which the species richness of a grassland can be increased by seeding in plant species that are not yet present and how strongly different ecosystem services are promoted as a result. This refers, for example, to the positive effects of certain species on yield and forage value, but also to other functions like pollination or carbon fixation. Seeding also allows us to assess the extent to which the current diversity of grasslands of different land uses is limited by the species’ restricted ability to disperse. At the same time, the experiment represents an attempt to make agricultural grassland potentially less vulnerable to climate and weather fluctuations, because the experimental increase in species could in turn also have a positive effect on the resilience of the system.

On the total of 73 grassland plots along the land use gradient in the three exploratories, a Seeding and Disturbance Experiment (SADE) has been set up, combining the use of regional (autochthonous) seeds and topsoil disturbance in a fully factorial way. Through the cooperation of numerous working groups of the Biodiversity Exploratories in the SADE experiment, numerous aboveground as well as belowground parameters and processes can be collected for joint analysis in the coming years.

On each grassland plot, the experiment consists of four 7 m × 7 m subplots on which the factors ‘disturbance’ and ‘seeding’ are explored, including a control plot (Figure 1). In order to separate the individual effects, not only the combination but also the separate implementation of the treatment variants is necessary. Seeding is carried out with regionally sourced and regionally specific seed. The available vegetation surveys from the exploratories were taken as the basis for the species pool to be introduced. The same species mixture, consisting of grasses, herbs and legumes, is used on each area of a region. The species mixtures differ between the exploratories depending on the regional species pool and contain 47 to 66 plant species. Disturbance by tilling or harrowing the topsoil to a depth of 10 cm resets the current vegetation and creates open germination sites. Thus, the regeneration of the ecosystem can be observed with and without the introduction of additional plant species. Further information and initial results can be found in the publication Klaus et. al 2017 (doi: 10.1093/jpe/rtw062). 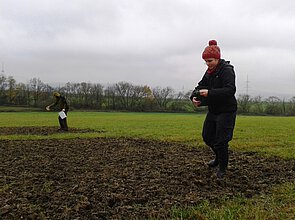 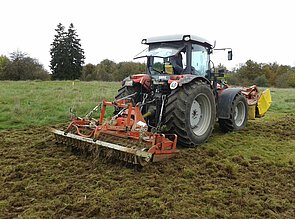 Disturbance on the Schwäbische Alb 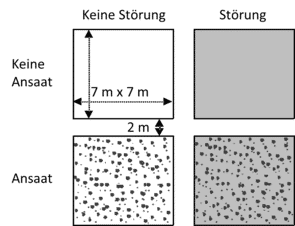 Fig. 1: Design of the seeding and disturbance experiment SADE

Working groups involved in SADE to date and in the future: