The exploratory Hainich-Dün is located in the northwest of Thuringia. It extends from the Hainich in the south over the Upper Eichsfeld in the middle to the Dün in the north. The landscape is characterized by extensive beech forests with beech as the dominant tree species, extensive arable land on the fertile soils of the Thuringian Basin as well as extensively used grassland and juniper heaths.

1,300
km2
Area
With an area of 1,300 km² and a population density of about 116 inhabitants per km², the Hainich-Dün region is the most densely populated exploratory.
258 – 550
m a.s.l.
Elevation
The Hainich frames the Thuringian Basin and surrounding farmland as an extensive, forested ridge. With 16,000 ha, it is one of the largest contiguous deciduous forest areas in Germany. The Dün in the north covers an area of 270 km² and about half of it is forested.
500 – 800
mm
Annual precipitation sum
Precipitation varies from the high-precipitation west of the ridges to the drier eastern lowlands. The medium-fresh sites are dominated by red beech forests with extensive wild garlic stands.

The Hainich-Dün exploratory encompasses the regions of Hainich and Dün as well as the Upper Eichsfeld. The Hainich is an extensive, forested mountain ridge whose eastern direction is joined by the lower-lying, mainly agriculturally used area of the Thuringian Basin. With 16,000 ha, the Hainich is one of the largest contiguous deciduous forest areas in Germany. In 1997, the 7,500 ha Hainich National Park was opened, and its core zone was declared a UNESCO World Natural Heritage Site in 2011. The Dün is also a mountain ridge with an extension of 270 km² of which about half is forested. Characteristic for the Mittelhainich as well as the Dün is the selection cutting forest management.

In the Hainich-Dün region there is a wide spectrum of differently used forests. In the last 50 years or so, natural forests have been able to develop in the area of the national park, which are very close to the original deciduous forests of Central Europe. In the Mittelhainich as well as in the Dün there is a special form of forest management, the so-called selection-cutting forest management.  Trees of different species are removed individually or in small groups after reaching a certain stem diameter. This is in contrast to beech old-growth forests, which are managed on a large scale.
The dominant tree species of the Hainich-Dün is the red beech, which is often mixed with mixed tree species such as ash, sycamore maple, mountain elm, oak and linden. In spring, early bloomers such as wood anemone, wild garlic, mercury, and spring snowflake dominate the forest landscape. The forest is home to demanding forest dwellers such as the wildcat, highly endangered deadwood beetles and fungi.

The grassland of the Hainich-Dün region is surrounded by small-scale structures of settlements, large-scale forests and extensive farmland. Most of the grassland is managed by agricultural cooperatives, the share of individual private farms is small. While the meadows are partly intensively managed and characterized by frequent mowing or intensive fertilization, extensively managed grassland in the Hainich-Dün region is primarily characterized by sheep grazing. Juniper heaths created by this form of farming can be found in Craula and Oberdorla, among other places, and their small bodies of water provide habitats for whinchat and barred warbler, for red-backed shrike and wryneck, for great crested newt and yellow-bellied toad. 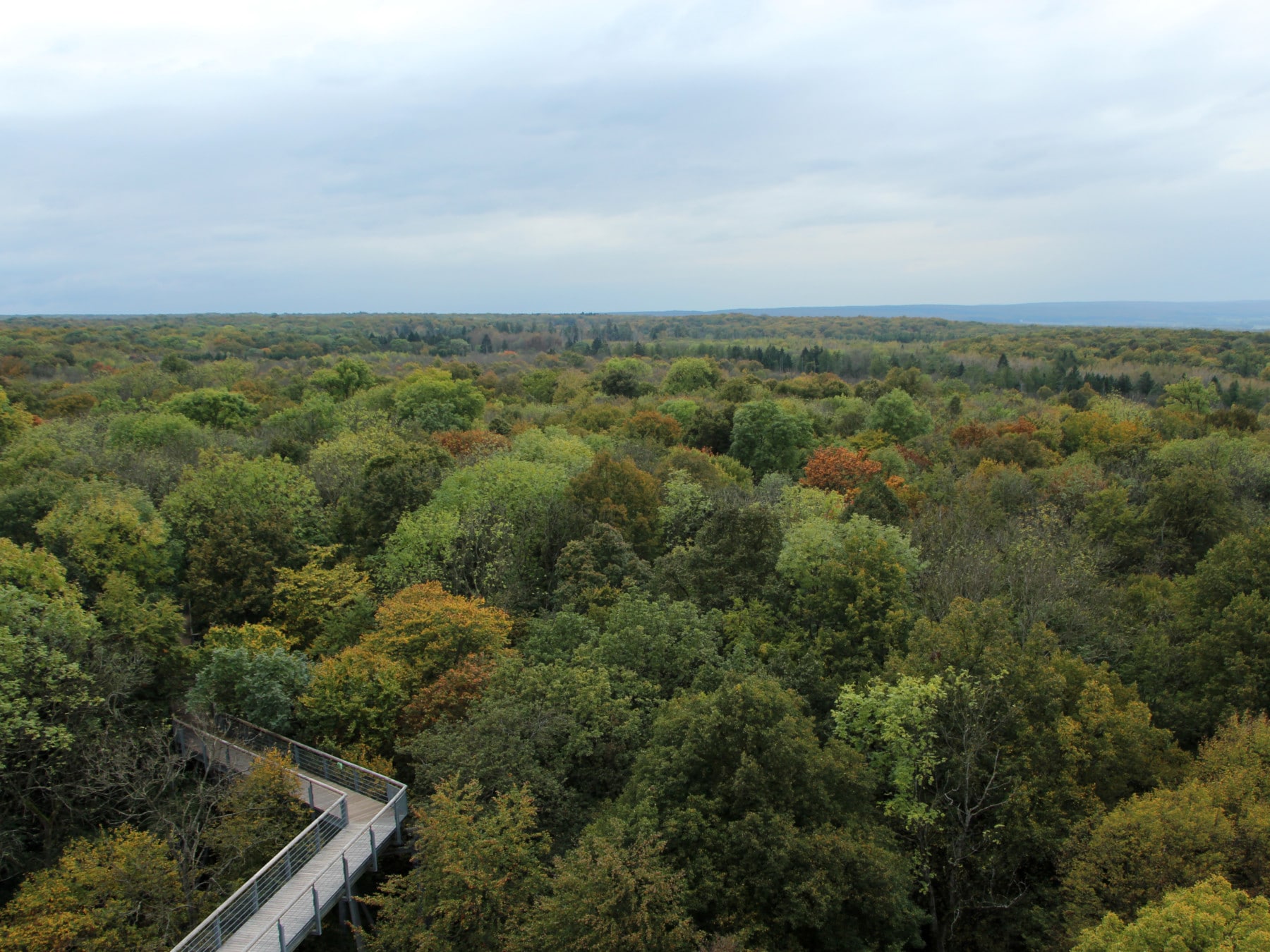 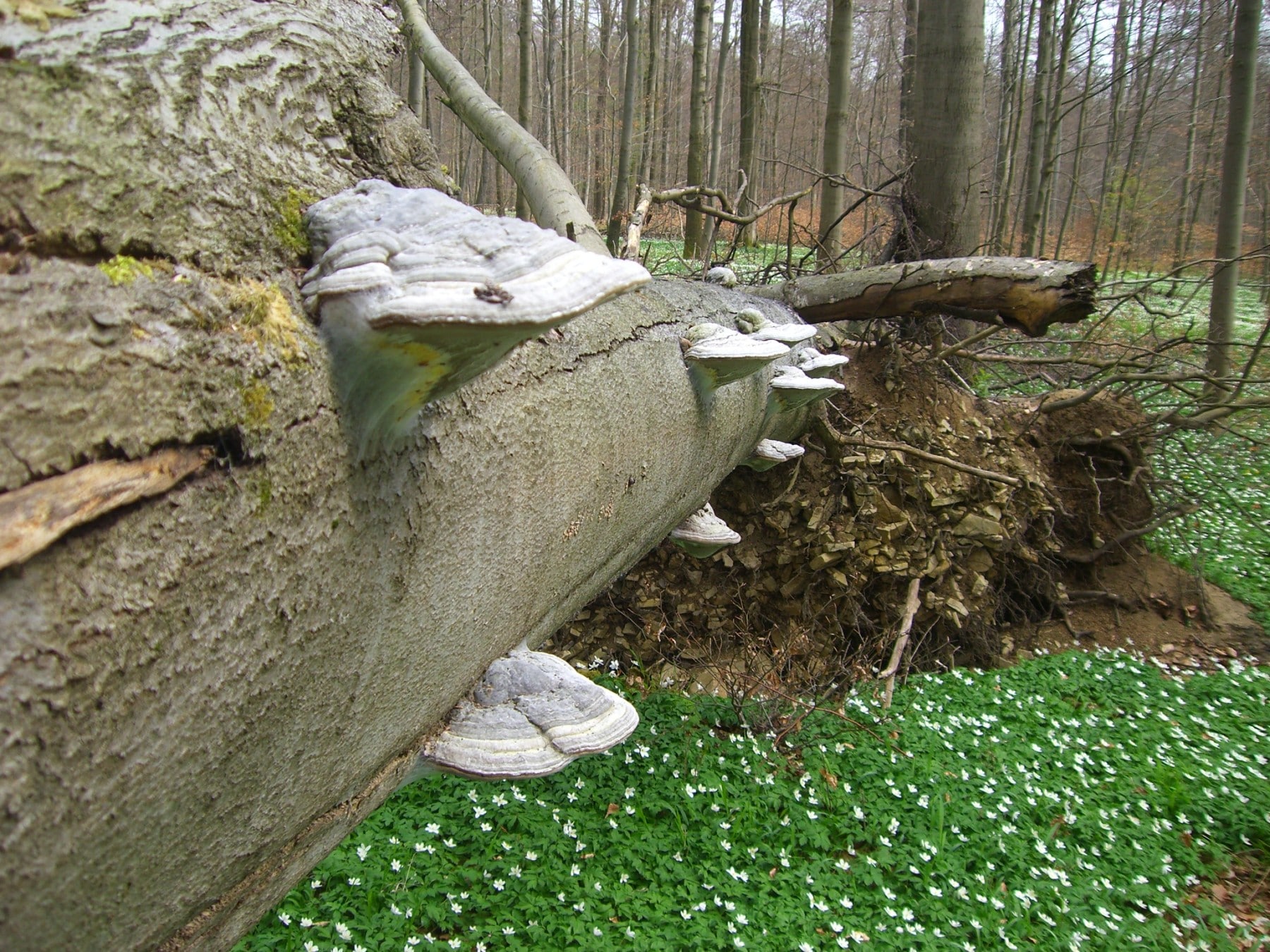 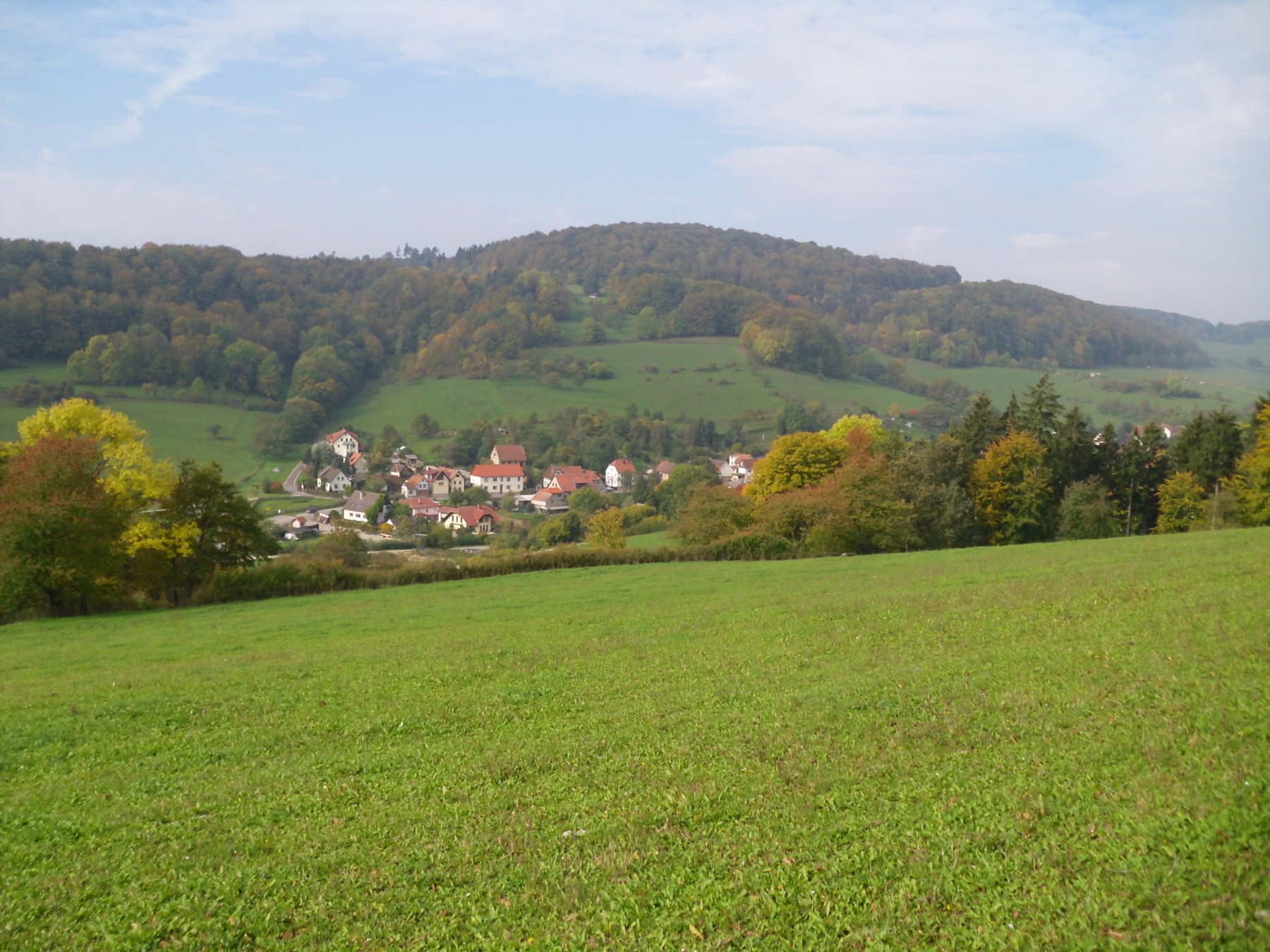 The forest areas of the Hainich are surrounded by small settlements, arable land, meadows, pastures and limestone grasslands

The Hainich, Dün and Upper Eichsfeld regions belong to the “Thuringian Basin and Marginal Plates” landscape. The precipitation varies, depending on the location, between 500-800 mm per year: The ridge areas in the west are rich in precipitation, the low areas of the Thuringian Basin in the east are poor in precipitation. The soils of the study region developed predominantly from limestone (Upper Muschelkalk) with a variable loess overburden and silty, loamy and clayey soil types dominate. When the loess cover was high, the soil development was mainly from loess. Since very different amounts of loess were deposited, the thickness of the solum varies greatly. While the calcareous weathered loams are often carbonate-rich, the pH of the soil horizons developed from loess is often between 5-6. Frequently, the loess-rich soils develop a clayey stagnant horizon due to strong leaching and subsequent stagnant waterlogging. The predominant soil types in the Hainich-Dün region include lessive and gley – on steeply sloping slopes and hilltops rendzines occur. Otherwise brown earths dominate. The soils of the intensively farmed Thuringian Basin are among the most fertile in Germany. 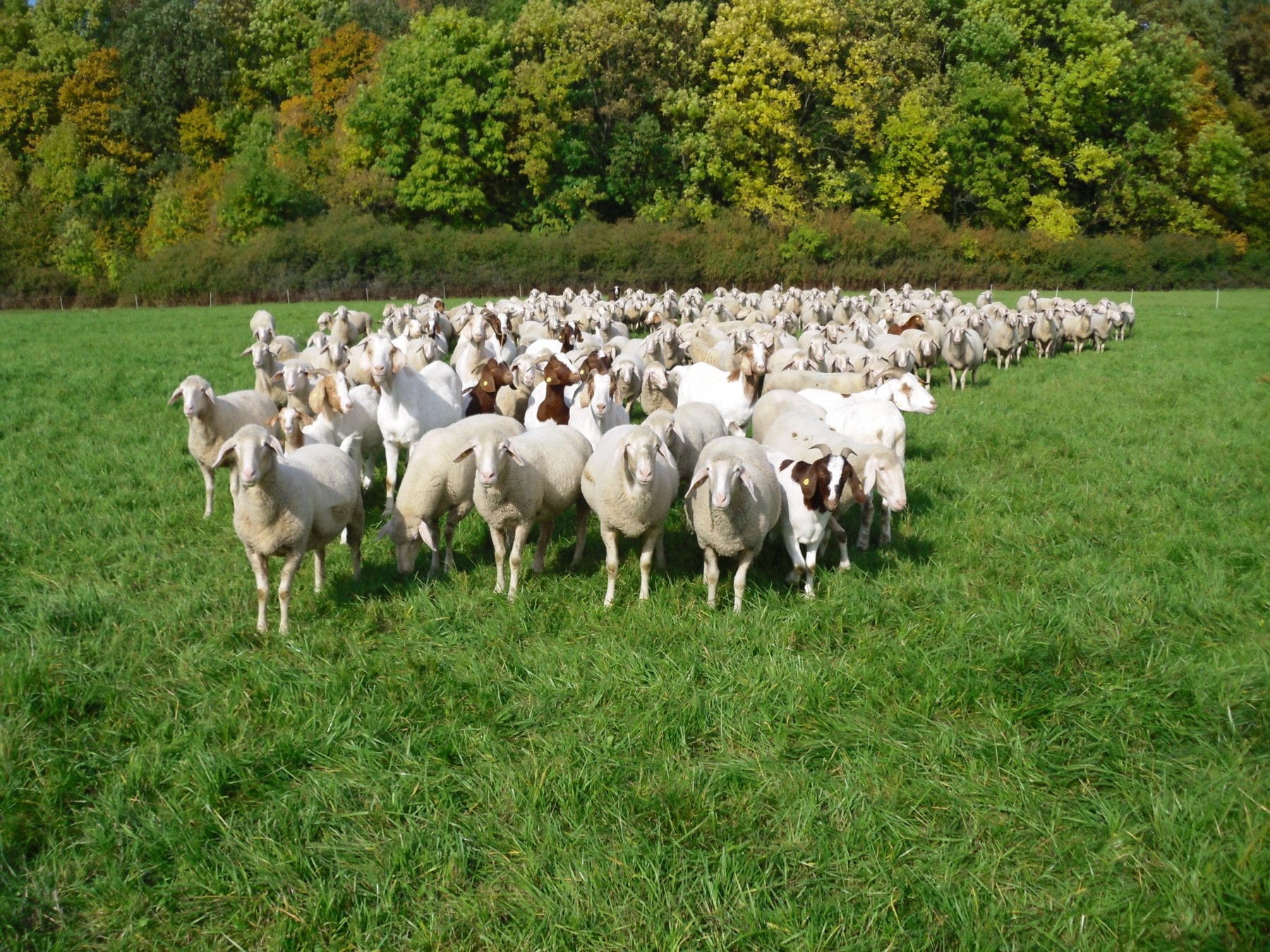 Sheep grazing as the original form of farming in the Hainich keeps the extensively managed grassland open. 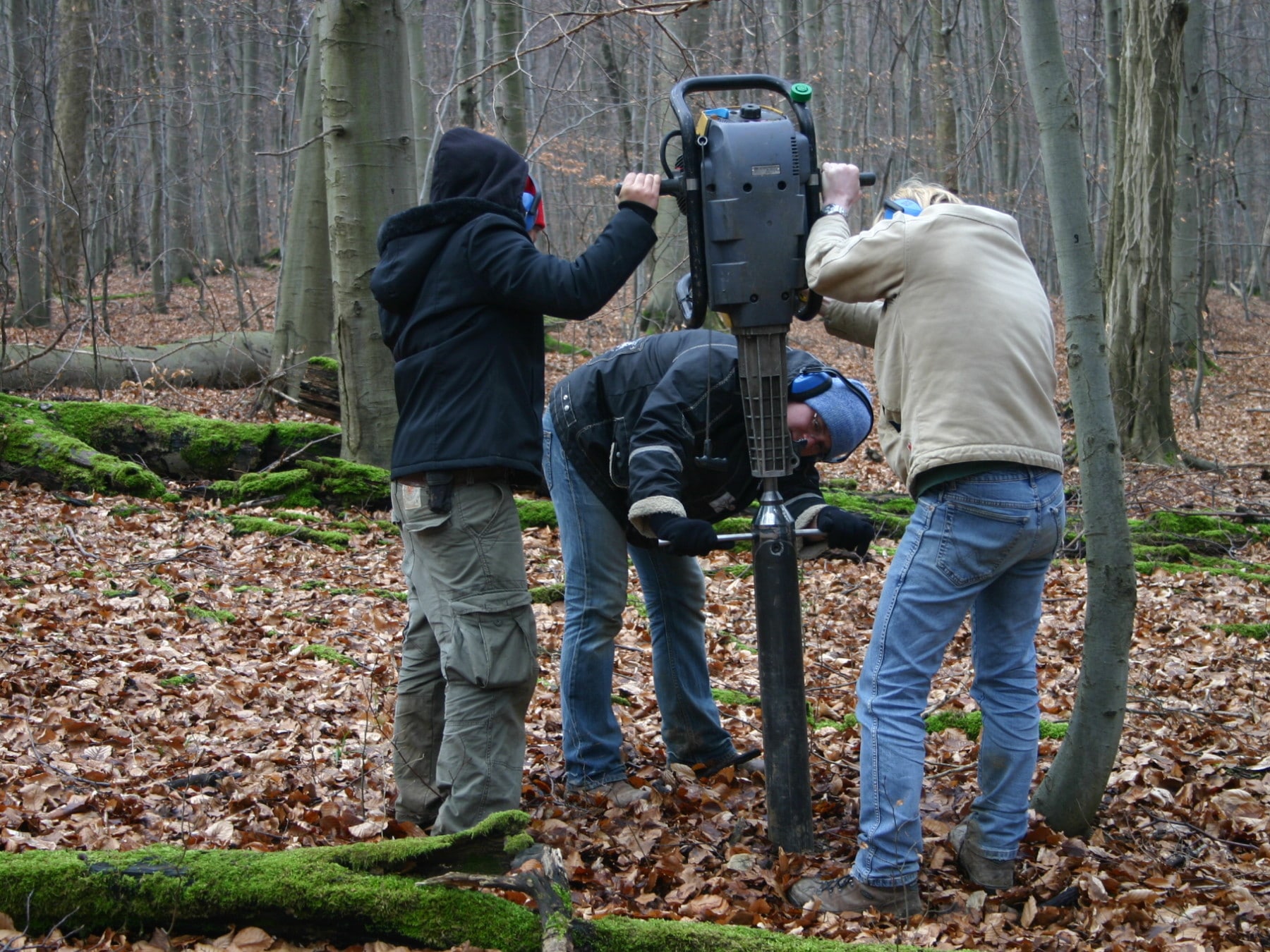 The soils of the Biodiversity Exploratories are regularly examined for nutrient ratios, material flows and the composition of the soil flora and fauna 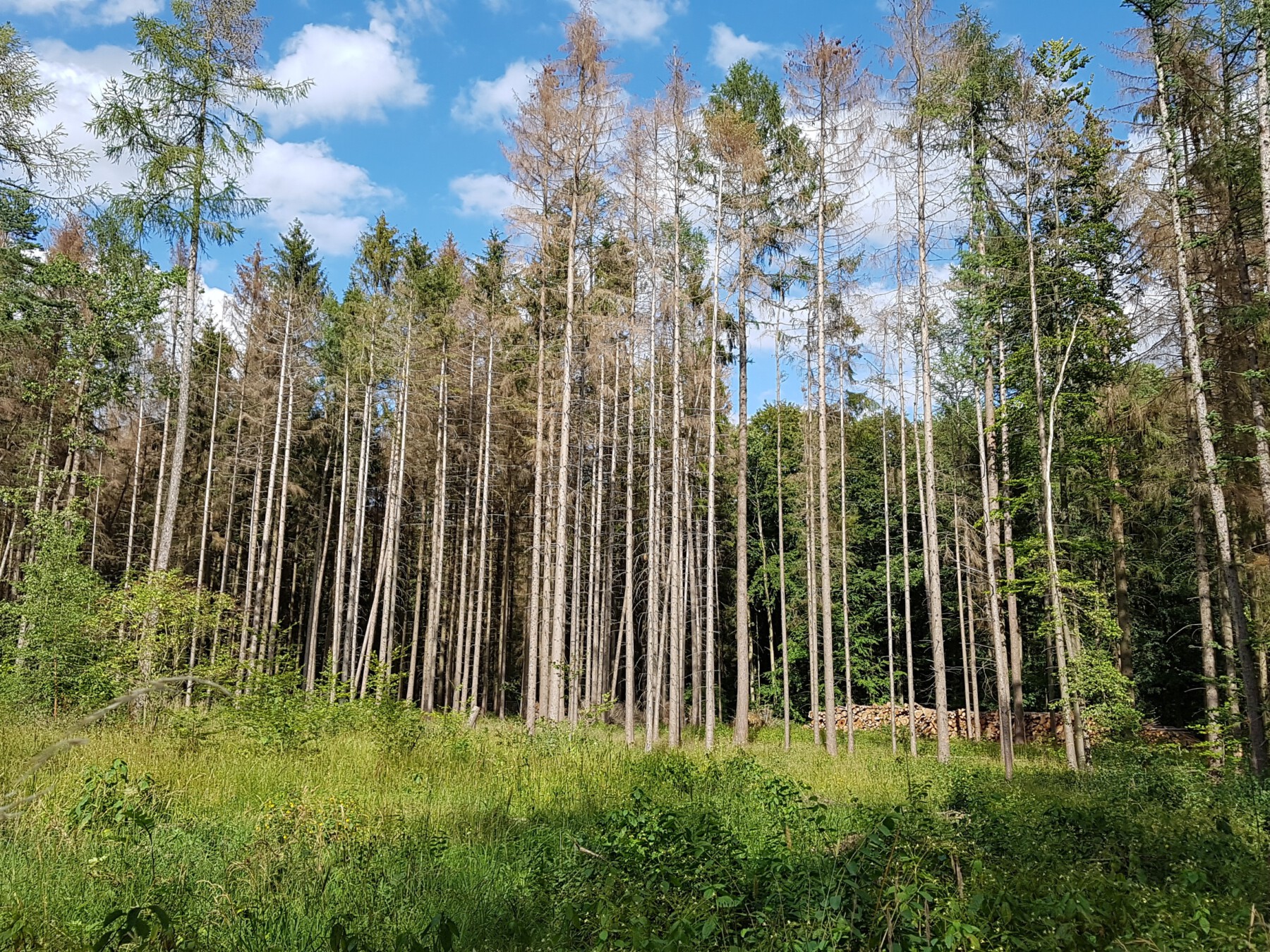 As part of the large-scale FOX experiment, a large number of trees were removed from various forests.

Using inventories from 1.000 plots surveyed per exploratory, 100 so-called Experimental plots (EP) (50 in forest and 50 in grassland) were selected and permanently marked. These 100 plots cover the widest possible range of land use intensities in the region, but differ as little as possible in other variables such as soil type. In forest, these experimental plots have a size of 100 x 100 m, and in grassland, 50 x 50 m. Each of the plots is equipped with a climate measurement station within a 3 x 3 m fenced area.

Depending on effort and cost, experiments can be conducted not only on all 100 EPs, but also on subsets of 50 (so-called MIP, medium research intensity) or 18 (so-called VIP, very intensively studied plots) study plots.

In the Hainich-Dün Exploratory, 3 additional VIPs were selected which cover a region-specific land use type: the selection-cutting forests („Plenterwald“).