Forests are characterized by a highly variable compositional and spatial structure being extremely important for various ecological processes and availability of resources and habitats. However, the specific structure of a forest stand is changed by stand development due to tree growth, ageing and competition, disturbances, and by forest management. 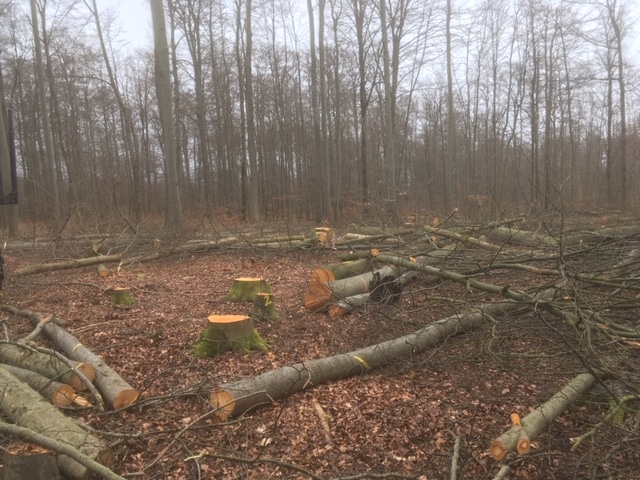 Silvicultural interventions may do both, homogenize or diversify stand structure. Therefore, the assessment of stand structure and its quantitative description are crucial for understanding the impact of forest management on biodiversity and ecosystem functioning.

The forests of the exploratories differ in respect to regeneration method employed, tree species mixture, developmental phase, age structure, layering and patchiness. The managed forests of the exploratories cover the entire spectrum from planted, even-aged, single-layered, monoculture stands of conifers (spruce or pine) via naturally regenerated, even-aged, single or double layered monoculture stands of broadleaves (beech or oak) of various developmental phases to even-aged man-made mixed forests and uneven-aged beech forests. Additionally, pure and mixed forests dominated by European beech which have been unmanaged since some decades are studied.

Within the framework of the exploratories, this project serves to provide quantitative data for all experimental plots on 1) attributes of forest structure, 2) changes in attributes of forest structure due to forest management and natural processes, 3) stand development and productivity, 4) type and magnitude of forest management interventions, 5) deadwood amount and composition, and 6) abundance of tree microhabitats. This information may serve as explanatory variables for all teams working on functional biodiversity at the level of specific species, functional groups or multidiversity.

Additionally, we will further develop existing approaches of quantifying forest management intensity in order to analyse the relationship between forest structure and land use intensity.

Since 2019, we are involved in the new forest gap experiment (FOX), to whose design, planning and implementation we substantially contributed.

Our work is strongly based on inventories. That is, we locate, count and measure the objects of interest, be it living trees, deadwood items or habitats. Repeated inventories serve to quantify temporal changes, like tree growth or deadwood accumulation. Additionally, we rely on terrestrial laser scanning.

All core projects provide important basic information on land use, diversity and ecosystem processes (long-term monitoring). This information is made available to all sub-projects and core projects for in depth research.

In the 6th phase (2020-2023), the core project Forest Structure provides the following services/baseline studies. The corresponding data are stored in BExIS.

Service provided during past phases

The core forest structure project has been part of the Biodiversity Exploratories since 2014, 4th phase. In the 4th and 5th phases, the Forest Structure Core Project provided the following service deliverables/baseline surveys. 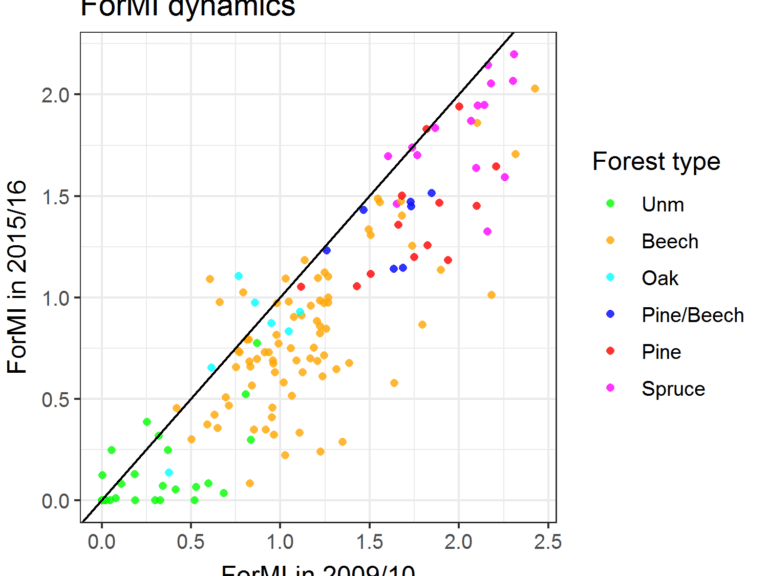 Status and dynamics of land use intensity in the forest measured with the indices ForMI. 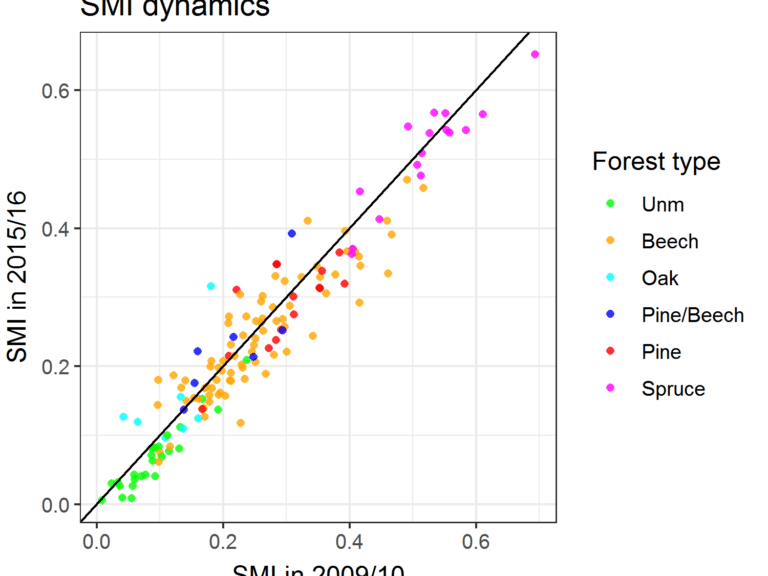 Status and dynamics of land use intensity in forests measured by SMI indices.

We found that different management of forests, including set-aside of commercial forests, affects forest growth, forest structure and biodiversity differently. Some results were quite unexpected.

Our most important finding is the positive effect of diverse forest management on the biodiversity of forest landscapes. These positive effects on biodiversity are largely based on the different (environmental) conditions in forests created by different forest treatments, such as through different tree species compositions or different forest developmental phases (Ehbrecht et al. 2019), which each provide habitats for specific species communities. Diversity in forest management thus leads to biotic diversity (Ammer et al. 2017, Heinrichs et al. 2020).

For example, forest landscapes composed of pure beech and pine stands showed higher species richness than the respective monospecific landscapes and additionally than mixed beech-pine stands for plants and lichens (Heinrichs et al. 2019) and other species groups. The comparison of forest management systems showed that the heterogeneity between young and old developmental phases of even-aged forests (i.e. a system composed of several stands that differ in age, but whose trees within a stand are of the same age) is more important for the biodiversity of many species groups, such as birds, beetles, spiders, plants and lichens, than the small-scale heterogeneity in uneven-aged forests, i.e. forests in which trees of all ages are intensively mixed (Schall et al. 2018a). Forests set aside for only a few decades rarely contributed to the biotic enrichment of forest landscapes (e.g. deadwood fungi), while the bulk of species, the so-called multi-diversity, benefits from a high proportion of even-aged forests (see Fig 1, Schall et al. 2020). The low impact on biodiversity of forests set aside only recently is not that surprising, however, since these forests are usually still in the optimal growth phase with a high-volume production of 7 m³ ha-1 year-1, a completely closed canopy and a homogeneous vertical structure (Schall et al. 2018b). This uniformity will only dissolve over time or due of disturbances, thereby generating the diversity of abiotic conditions that is obviously promoting biodiversity.

The modulating effect of cutting interventions also appeared over time. Thus, managed forests showed no decrease in the diversity of arthropods, which was otherwise observed in forests as well as in grassland, only at higher levels of interventions (Seibold et al. 2019, Extended Data Fig. 4). 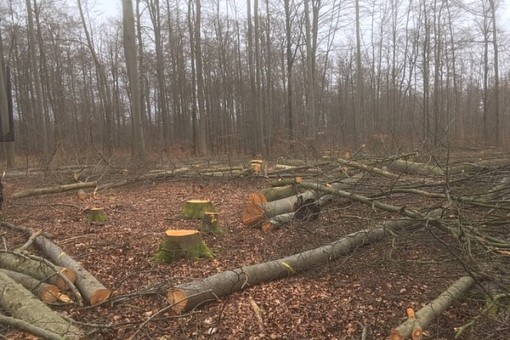