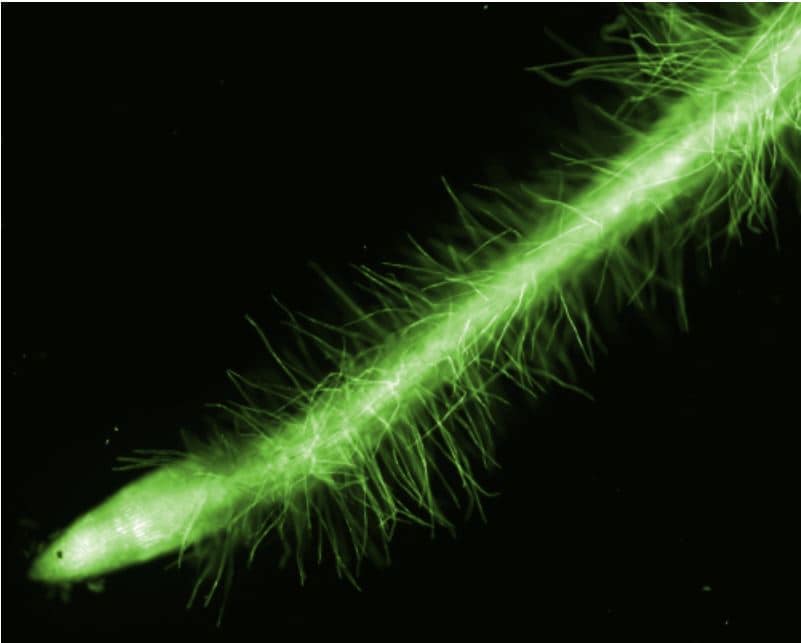 Plant resource economics are classically defined as a spectrum ranging from acquisition to conservation. Belowground structures for resource uptake – namely fine roots – are still underrepresented in our understanding of whole plant form and function. Over the last decade, it has been recognised that root economics are multidimensional, particularly because of their interaction with soil biota. A trade-off between the investment into root surface and arbuscular mycorrhizal fungal (AMF) surface for nutrient uptake has been hypothesised while mainly focussing on the specific root length as a proxy of root surface maximisation. On the other hand, it is well known that variation in root hairs strongly affects phosphorus uptake. Still, root hairs are not included in recent concepts of belowground resource economics. In preliminary greenhouse experiments, we found root hair length and incidence to negatively correlate with mycorrhizal colonisation. This gradient between a strategy of increasing either root hair surface or the mycorrhizal symbiosis was found to be independent of variation in general root fineness, suggesting that the trade-off contains information disregarded in root economic concepts so far.

Acquisitive AMF surface – namely extraradical hyphal length – has been found to increase with land-use intensity on the plant community level, with soil nutrient stoichiometry being a possible environmental driver. Therefore, when studying the complexity of the root-fungal-surface trade-off, field data including soil environmental variation are needed.

In this project, we aim to test the concept of a root-fungal-surface trade-off including root hairs and extraradical hyphae for the first time. In a synthesis, data will be combined with root morphological, anatomical and chemical traits from previous Biodiversity Exploratories projects to integrate the root-fungal-surface trade-off into existing root economic concepts. The framework of the Biodiversity Exploratories will allow us to link this improved understanding of root trait variation to ecosystem processes like plant productivity, nutrient cycling or soil aggregation. This project will enhance our mechanistic understanding of root trait multidimensionality mediated by the AM symbiosis. Furthermore, it will help towards examining the importance of root traits for predicting plant community and ecosystem changes under increasing land use and global change.

We will sample single individuals of the most dominant plant species in the plots of the Biodiversity Exploratories (VIP level) along a land-use gradient. Due to species overlap between the field plots I will also be able to test inter- and intraspecific pattern of variation. The AMF community in the rhizosphere of the plant individuals will be analysed to test if changes in extraradical hyphal length originate from AMF community shifts. In a mechanistic greenhouse experiment the direct effect of soil nutrient stoichiometry will be studied. Both shifts in AMF community in the rhizosphere as well as in the root compartment will be examined to simultaneously test plant mediation of fungal community shifts as well as fungal species plasticity in extraradical hyphae allocation.