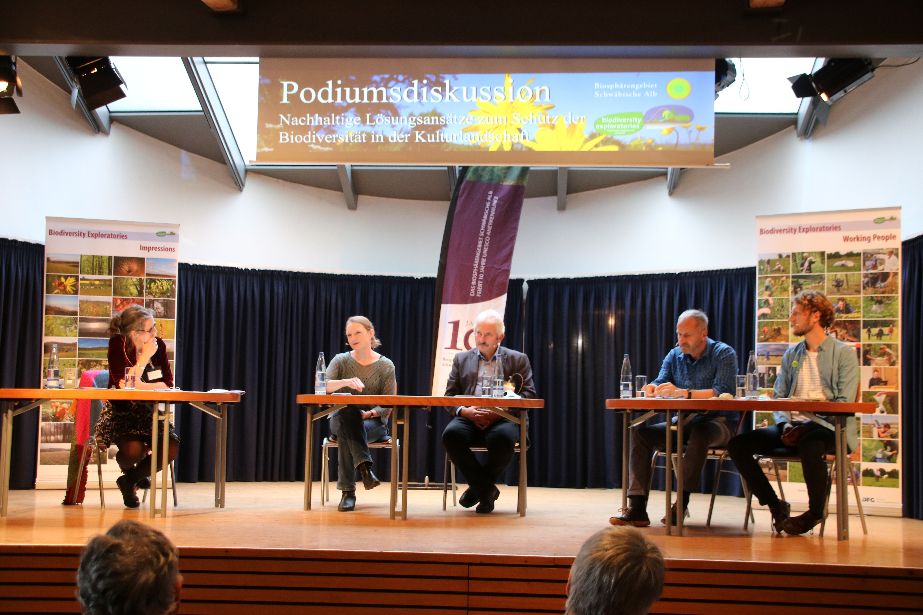 240 researchers and practitioners came together virtually and on site in the Swabian Alb biosphere region to exchange ideas on basic principles, developments and sustainable solutions for the protection of biodiversity.

Current findings on the decline of biodiversity highlight an acute need for action and call for an interdisciplinary exchange between scientists, regional decision-makers and other stakeholders. This exchange was promoted by the research platform “Biodiversity Exploratories” funded by the German Research Foundation, in particular the Institute for Evolutionary Ecology and Conservation Genomics at the University of Ulm and the office of the Swabian Alb Biosphere Reserve, with the “5th Albsymposion”. The hybrid conference on the 19th and 20th of November on the topic of “Biodiversity in the Cultural Landscape – Scientific Basis, Developments and Sustainable Solutions for the Protection of Biodiversity” inspired the online participants and the participants on site in Münsingen alike. “We believe that most of the participants were motivated to become even more active in the conservation of biodiversity,” summarised the conference organisers. Markus Fischer from the University of Bern aptly stated, “Even if much is determined by the state, the federal government and the EU – each person has a private or professional scope for shaping his or her own commitment to nature conservation. It is important to use this room for manoeuvre”.

With lectures, poster presentations and a panel discussion, basic principles, current developments as well as sustainable solutions that promote biodiversity and are at the same time attractive from an economic and social point of view were presented and discussed. Insights into ongoing biodiversity and ecosystem research in the biosphere area were given and approaches for action in the biosphere area were addressed. The spectrum ranged from biodiversity research findings and numerous project examples to psychological factors that ultimately promote behavioural changes for more nature conservation commitment. Top-class speakers were invited who succeeded in presenting scientific findings in a generally understandable way. Present were university representatives, regional decision-makers and practitioners from the fields of nature conservation, agriculture and forestry as well as association representatives. The conference not only promoted the exchange between research and practice, but also provided an opportunity to initiate new partnerships and cooperations. In addition, new impulses were given for the sustainable use and maintenance of the cultural landscape. This was very well received by the participants.

With the hybrid version, the organisers broke new ground. The great added value of the hybrid version is not only the promotion of exchange under COVID-19 conditions, but also that many more participants from all over Germany could be reached, who would not have taken part in a pure attendance event. On site, the number of people was limited due to COVID-19 and strict hygiene regulations applied. The event continued the successful series of Albsymposia, the scientific conference format in the Swabian Alb biosphere region.

The Central Coordination Office (BEO) is the contact point for all internal and external inquiries from scientists, authorities and interested parties.

Write e-mail
Participation in the Exploratories

The Exploratories for functional biodiversity research provide a platform for modern, interdisciplinary research approaches in biodiversity and ecosystem research.

From March 1, 2020 to February 28, 2023, runs the sixth phase of the Biodiversity Exploratories. We will keep you informed about a new call for proposals here.