Deadwood (also referred to as coarse woody debris) is a key habitat element in all forest ecosystems and is decayed by various types of organisms such as insects, bacteria and fungi. Among these, fungi, chiefly Basidiomycota and a few Ascomycota, are the main wood decomposers. Here, we intend to investigate the change in deadwood fungal diversity along a forest management intensity gradient and its influence on wood decay and ecosystem processes such as gaseous emissions and organic carbon leaching. Most studies on deadwood decomposition have focused on old growth forests (primeval forests), where large amounts of deadwood are available. However, whether the decomposition patterns in deadwood are altered through patterns in fungal colonization which are related to the forest management (intensity, landscape context) has not been investigated so far.

We hypothesize that the diversity of wood-decaying fungi increases with decreasing forest management intensity and that wood decomposition rates as well as the degree to which wood is completely mineralized increase with fungal diversity. An alternative hypothesis to the latter is that in cases where wood decomposition is dominated by few (aggressive) fungi (e.g. Armillaria spp., Xylariaspp.), a substantial part of deadwood is chemically transformed by these fungi into persistent melanins, which may form a carbon sink in less managed forests.

2. At the stand level, higher diversity of wood decaying fungi leads to a higher variation of wood decay pathways/mechanisms and to enhanced overall CWD decomposition.

3. At the level of logs, higher species richness of wood decaying fungi leads to faster decomposition and a more complete mineralization of C. At lower species richness, proportionally more C is lost in the form of dissolved organic carbon (DOC) or methane, and more C may be converted by fungi into persistent melanins.

4. Species richness of wood decaying fungi will be highest in intermediate decay stages and therefore decomposition rates will also be highest in these phases of decay.

5. Species richness of wood decaying fungi and Mycetozoa will be higher on larger logs, but on a wood volume basis it will be higher in smaller logs.

to provide an improved understanding on how decomposer communities execute wood degradation processes under fluctuating temperatures. In addition, we provide the opportunity to correlate between ecosystem processes such as wood decay and microbial diversity over tree species and along a gradient of forest management intensity on various geographic scales. 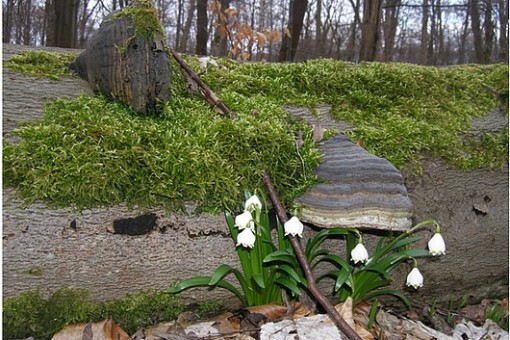